For millions of years Undara was an active shield volcano. About 190,000 years ago, in the Cainozoic Era, there was a massive eruption and lava flowed more than 90km to the north and over 160km to the north-west. An estimated 23.3km3 of lava flowed from the volcano at a rate of about 1000m3 every second. A lava flow this large could fill Sydney Harbour in six days. It is thought that the lava flowed at a temperature of around 1200°C.

The lava tubes and caves were formed when rivers of lava confined to a valley crusted over and formed a roof. Insulated in its casing of solidified lava, the lava flow carried on for tens of kilometres before draining out, leaving an empty tube of lava. Weaker sections of the roof of the tubes later collapsed to form caves and depressions. Collapsed tubes and lava ponds along the flow channels of Undara are easily identified from the air as green lines of lush vegetation. More than 70 caves have been found in the park.

The Undara lava tube system is Australia's longest, and one of the longest in the world. It is also unusual, if not unique, in that it developed on a granitic basement. The lava tube caves in this national park are the finest examples in Australia and contain specialised ecosystems that are internationally significant. Bayliss Cave is considered one of the world's most important, biologically diverse caves. Other examples of well-preserved volcanic features in the park include craters, lava ponds and flows, and perennial springs.

For a detailed explanation of the Undara Lava Tubes take a look at the Undara - A Legacy in Lava pdf created by Dr Gilbert Price & Emily Wood. 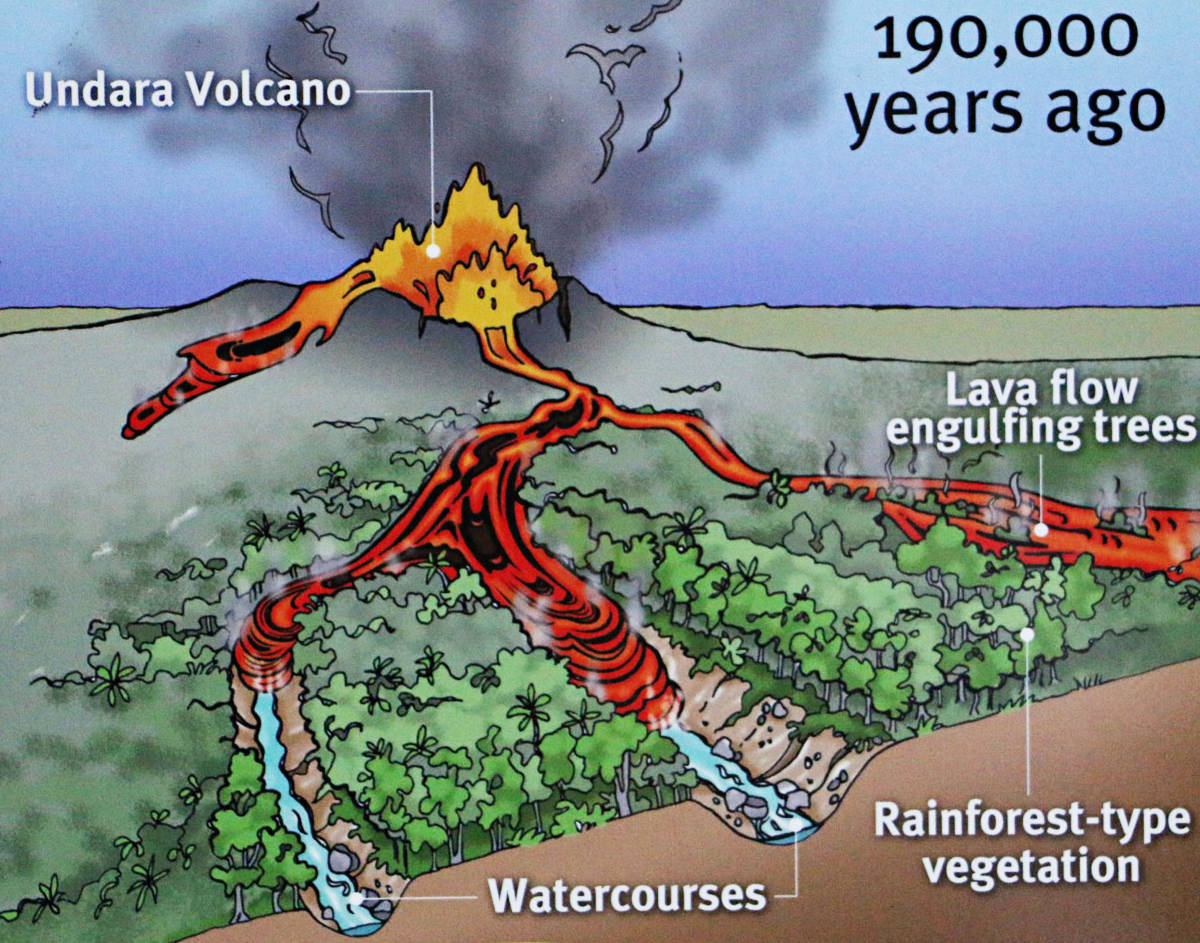 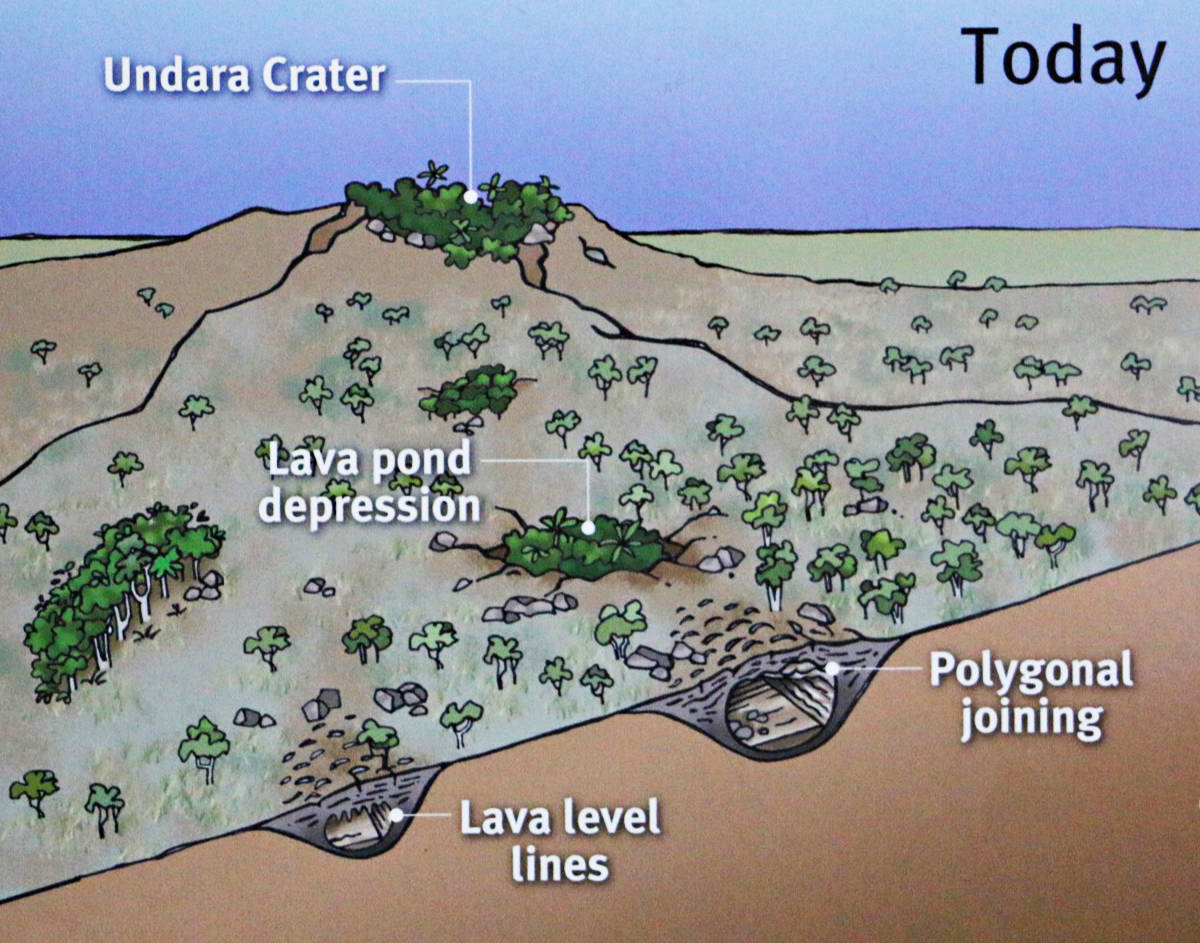 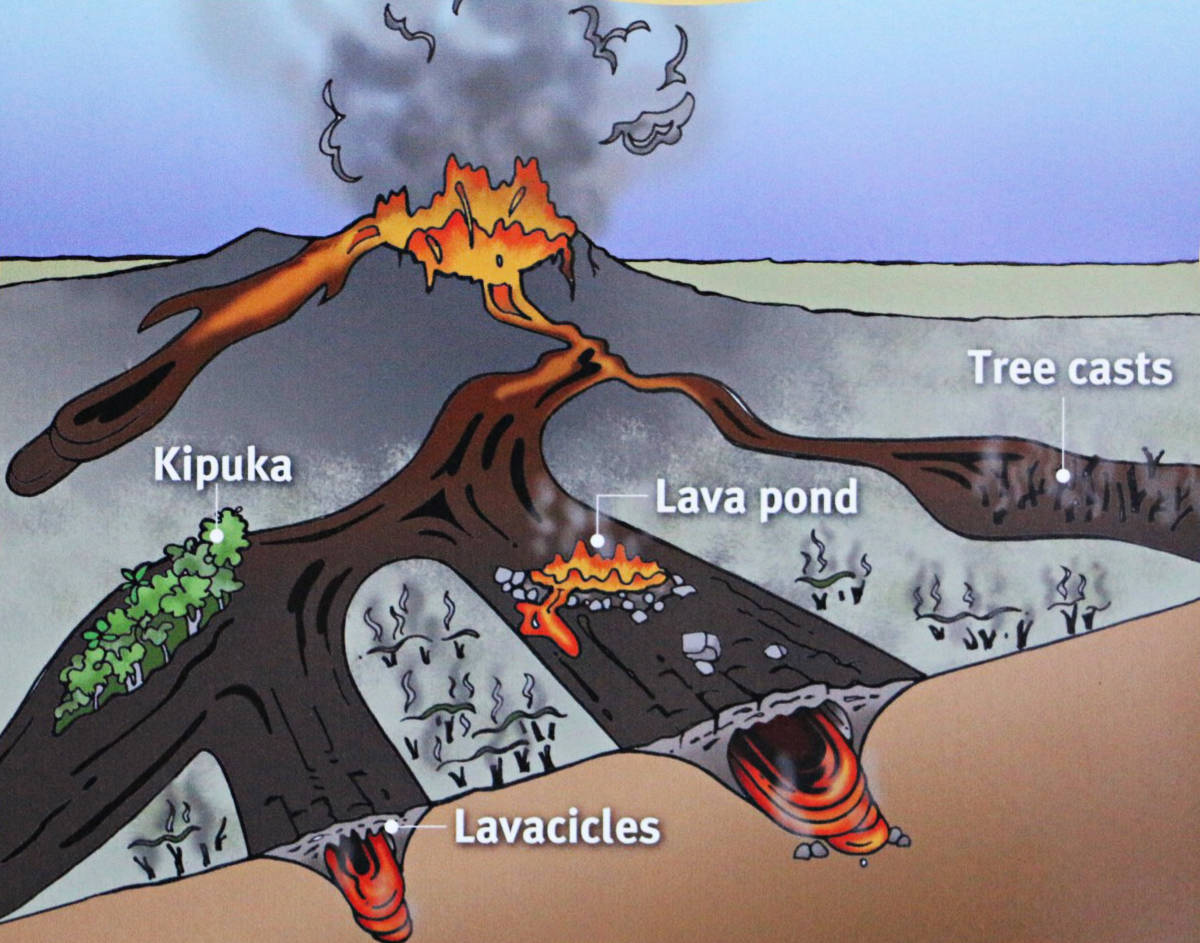 Now functioning like huge stormwater drains, the tubes collect and carry much of the summer rain. Over the years, the ceilings of the tubes have collapsed in many places, allowing vegetation to flourish in the damp interiors. Ribbons of emerald-green vine-thicket, contrasting with the surrounding dry savanna woodland, mark-out the courses of the tubes. The vine-thicket contains distinctive and ancient plants that have strong affinities with Gondwana species.

The vine-thicket is thought to be a remnant of a once, much more widespread, vegetation type. About 300 million years ago Australia, Africa, South America, India and Antarctica were connected and formed a huge continent known as Gondwanaland. Climatic conditions and the frequency of fires were different, and vine-thicket floral communities were common on Gondwanaland. Gradually over millions of years the continents forming Gondwanaland began to drift apart. The communities of plants and animals, on the now separate continents, began to evolve in isolation from each other, giving rise to the different flora and fauna found today. Scattered fragments of the original plant communities that flourished on Gondwanaland survived in rare, isolated pockets. Their closely related descendants still exist today in tiny patches scattered over several continents. The vine thicket in Undara Volcanic National Park is believed to be a rare, isolated pocket of this relict—ancient flora that has escaped the ravages of fire, drought and the bulldozer.

The near threatenend (rare) white-flowered onion vine Ipomoea saintronanensis, occurs in vine-thickets in this park.

Perennial springs are outstanding features in this usually dry volcanic/granitic terrain, providing important habitats for a range of wildlife. Associated with these springs are swamps and dense thickets of black tea-tree Melaleuca bracteata, interspersed with a range of trees including figs and eucalypts

The lava caves of this park are important homes for a number of animals. High levels of carbon dioxide (up to six per cent—200 times greater than normal levels), stagnant air and high relative humidity exist in some tubes. This has created a habitat where only specially adapted animals can survive. An intriguing community of animals has evolved here as a result. Bayliss Cave is considered to be one of the world's most biologically diverse caves and contains at least 52 resident species of animals. It supports the most diverse assemblages of arthropods (segmented insects) recorded for any cave in North Queensland.

Four types of insectivorous bat (also known as micro bats) roost in the caves. Bakers Cave is a major nursery site for the large bent-wing bat Miniopterus schreibersii, the eastern cave bat Vespadelus troughtoni, northern horseshoe bat Rhinolophus megaphyllus ignifer, and coastal sheathtail bat Taphozous australis. Bakers Cave is thought to house about 80,000 of these little mammals during the maternity period, one of the largest colonies in north Queensland.

The antilopine wallaroo Macropus antilopinus, a grassy woodland inhabitant, reaches its southern limit in this area. It is particularly common around Fifteen Mile Spring in Undara Volcanic National Park. Common wallaroos Macropus robustus, are also inhabitants of this park. These large, stocky wallaroos have shaggy, grey fur and a noticeably bare, black nose. They spend the day lazing in the shelter of overhanging rocks, emerging in the cool of the evening to feed. Northern quolls Dasyurus hallucatus(external link) sleep in log hollows during the day, emerging at night to hunt for small animals and insects.

The lava tubes were well recognised in the area by the late 1800s—becoming features of interest and receiving intermittent, unmanaged visitation. Before becoming a national park, Undara was part of a large pastoral station, known as Rosella Plains. The station belonged to the Collins family and was named after the native rosella plants, of which seven species are found in the national park. Relics of pastoral activity include a wooden fork whip used for water extraction at the Fifteen Mile Spring and an assortment of corrugated iron/pole and concrete/pole sheds at Yaramulla. The Collins family now runs Undara Experience(external link) from a property adjacent to the park.

Undara Volcanic National Park, and much of the Etheridge Shire, is regarded as the traditional country of the Ewamian (pronounced yur-amin) Aboriginal people. The ancestors of present-day Ewamian people were born, lived and hunted in this area before the arrival of Europeans. Evidence of Aboriginal occupation includes stone artefacts and scarred trees associated with caves, vine-thickets and springs. Ewamian people today still have a responsibility to care for country. They do this through their involvement in a range of activities, such as cultural heritage surveys and assisting Queensland Parks and Wildlife rangers with land management activities.